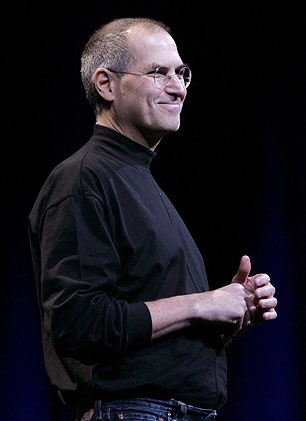 Steve Jobs, Apple Founder Has Passed Away At 56.

teve Jobs, the technological visionary who helped transform the way the world communicates and shares information with such innovative products as the Macintosh computer, the iPad, the iPod and the iPhone, died today after a long battle with pancreatic cancer. He was 56.

Jobs co-founded Apple Inc. in the late 1970s with Steve Wozniak, a fellow computer prodigy he met while working at Hewlett-Packard. After revolutionizing personal computing with the introduction of the first Macintosh PC in 1984, Jobs was ousted from Apple in a power struggle the following year. During his enforced hiatus he founded NeXT Computer, which Apple eventually bought in 1996, bringing the dissenting inventor back into the fold. Jobs served as Apple CEO from then until 2011, a period in which the resurgent company introduced a steady stream of groundbreaking products including the iPod, the iTunes digital music store, the iPhone and the iPad media tablet.

Born in San Francisco in 1955 and raised by an adoptive family in nearby Mountain View, Jobs was one of the most prominent and influential figures to emerge from the generation that came of age in the 1960s and 1970s. He studied Buddhism and counted his LSD use as one of the most significant experiences of his life. He once told 60 Minutes that his business model was the Beatles’ partnership, and he became well-known (and easily parodied) for his signature look — faded Levis, black mock turtleneck, running shoes. In addition to Apple, Jobs was instrumental in the creation of Pixar, the film company that has produced such animated classics as Toy Story, Finding Nemo and WALL-E. Jobs’ 1986 purchase of a computer graphics division of Lucasfilms led to the development of the acclaimed animation team.

Jobs’ celebrity status as a tech maverick made him powerful and wealthy. In 2010 Forbes estimated he was worth more than $8 billion. In addition to more than 5 million shares of Apple, he owned 138 million shares in Disney stock, which he earned when the company purchased Pixar in 2006.

Jobs had been struggling with health issues for several years. In 2004 he was diagnosed with a rare form of pancreatic cancer; five years later he underwent a liver transplant. He resigned as Apple CEO in August 2011, stating that he could “no longer meet [his] duties and expectations” in the role. Steve Jobs is survived by his wife, Laurene Powell; four children, including one from a previous relationship; and his biological sister, the author Mona Simpson.